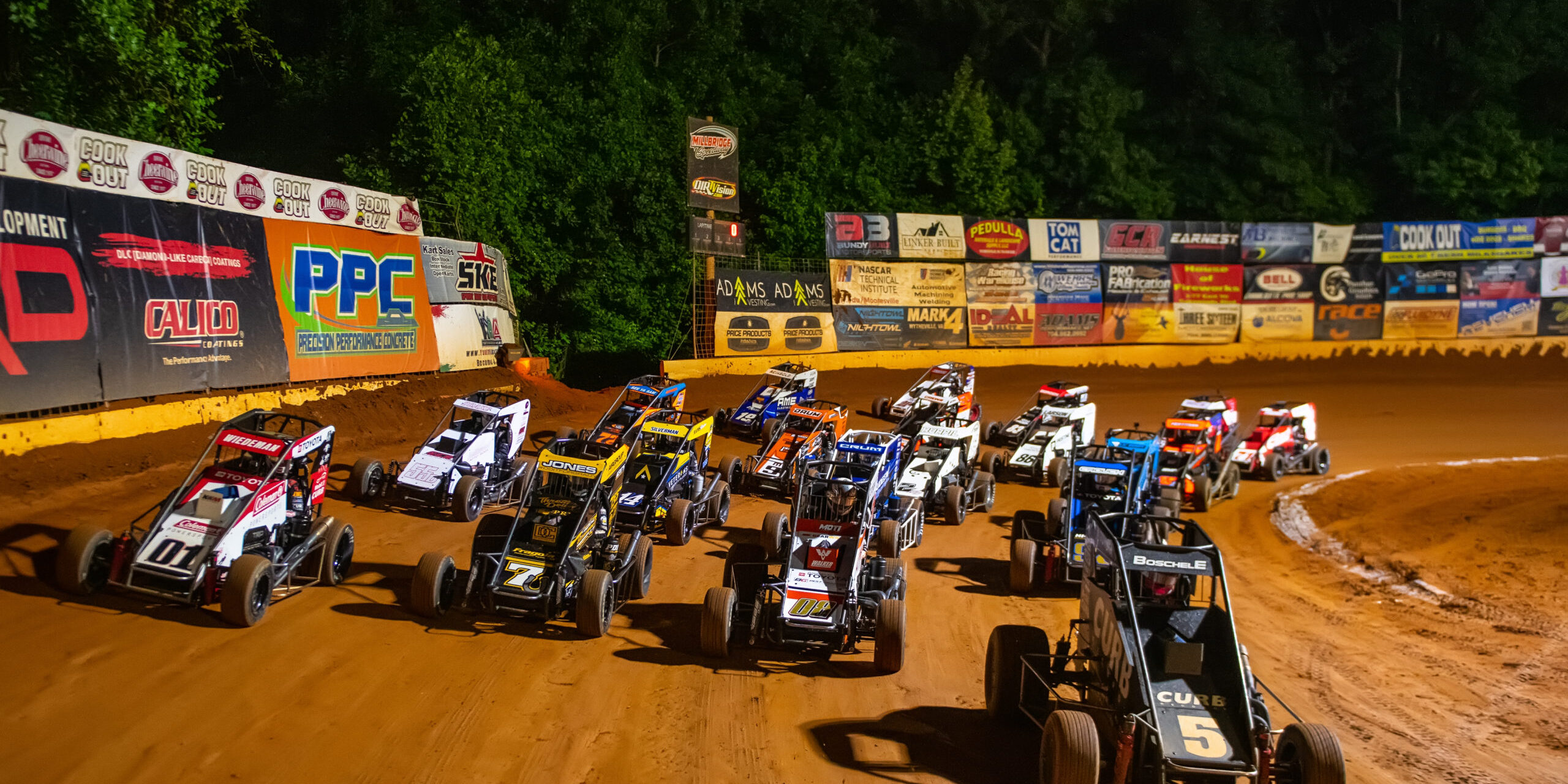 Tuesday’s debut for the Xtreme Outlaw Midget Series presented by Toyota was an event months in the making.

The creation of the new Series was announced at PRI in December, more than five whole months ago. On Tuesday, May 24, 2022, everything finally came to fruition with the official launching of the Midget division at Millbridge Speedway in Salisbury, North Carolina. A star-studded field of 35 cars, plus a heap of enthralled race fans made the long-awaited debut an instant success.

On this night, making the most history was none other than hometown hero, Gavan Boschele. The 14-year-old native of Mooresville, NC led the final nine of 30 laps in the Keith Kunz/Curb-Agajanian Motorsport, Curb Records, Bullet/Toyota #5, officially becoming the first winner in Xtreme Outlaw Midget Series history.

Boschele’s breakthrough, his second-ever National Midget win (POWRi 2021), didn’t come without a hint of controversy, however. After starting from the pole position, Boschele backed into second and held the runner-up spot for 21 laps while his KKM teammate, Bryant Wiedeman of Colby, KS, controlled the race.

The $4,000-to-win affair reached its breaking point on the restart with nine to go when Boschele barely hooked Wiedeman’s rear bumper and sent the Yerf Dog #01 spinning in front of the field. Boschele escaped unscathed, but the same could not be said for Wiedeman and a pile of 10+ other competitors with nowhere to avoid the stopped car.

It was shaping up to be an epic duel between the two teenagers with Wiedeman stuck to the low-line and Boschele up top banging the boards. Once in command, Boschele faced no challenges from the rest of the field and cruised away to a 0.938-second margin of victory.

“I hate that I got into Bryant [Wiedeman] there,” Boschele acknowledged. “I knew what he was doing the whole race and we had no problems before, but then I think he caught a rut and that split-second got me to his back bumper before I could react and got him. It’s a racing deal, but it still sucks.

“It’s pretty awesome to win this first-ever race, though, and especially to do it at my home track. These KKM guys gave me an incredible car. I’m excited to see what we can do tomorrow when it gets a little slicker.”

Finishing in the runner-up spot with an impressive 12th-to-second charge was Zach Daum of Pocahontas, IL. The three-time POWRi National Midget champion showed the poise of a veteran as he bided his time and cautiously maneuvered to the front in the Bundy Built #19M entry.

Closing out the podium was another Mooresville, NC native Nick Drake bringing the #55 home in third place. He was as high as second place on one of the late restarts but eventually faded as Daum continued his march forward.

DIRTcar UMP Modified legend Nick Hoffman traded his fenders in for torsion bars and promptly drove from 13th-to-fourth to begin his Xtreme Outlaw Midget career. Trailing him with the inaugural TJ Forged Hard Charger Award was Brent Crews for hustling the Diaedge #71M from 16th-to-fifth in the 30-lapper.

The likes of Cannon McIntosh (11th), Bryant Wiedeman (13th), Kyle Jones (15th), Kyle Larson (16th), and Chance Crum (19th) had to settle for some disappointing finishes outside the top-10 after being collected in the carnage while running toward the front.

Upcoming Events (Wed.) – The Xtreme Outlaw Midget Series presented by Toyota will conclude the Production Alliance Group Double Down Showdown with a $5,000-to-win program on Wednesday, May 25 at Millbridge Speedway in Salisbury, NC. Tickets are available at the gate, or you can watch every lap LIVE on DIRTVision.

As pretty as a @knoxvilleraces sunset 🫧🛁

🙌 The wait is finally over, the Q3 content drop is available now!

P5 @hickoryspeedway in @Cplms09 race last night! 21 cars…Had some electrical issues and drove from the trunk to the front twice! Special thanks to Buggy & @DlpMotorsports team for all their hard work and the bad fast car!
🎥: @LorinRanier
@TeamChevy @MSportgames @NASCARHeat